The Pipevine Swallowtail flutters his wings to groom the flowers as he settles into place. His deft landing is so subtle that only a few grains of pollen slip onto the pedals of the flower. The scent of the sun warmed nectar fills the air around the the little stand of hibiscus bushes that we call Rose Of Sharon. He’s living the sweet life. Throughout his adult life he’ll visit and pollinate a variety of flowers and actually share a meal with humans by visiting flowers that we also consume. It had a fact that Rose Of Sharon originates in Asia and in its homeland it is consumed like a vegetable. But we’ll explore that topic on a different post. Tonight’s post is about the poison that gives the Pipevine Swallowtail it’s name. The Dutchman’s Pipe.

The beautiful black wings with their iridescent blue highlights and bright orange spots started off as a black and red worm that fed exclusively on on a toxic vine. I have visited this particular vine on and off for a couple of years but it hasn’t been host to a brood of caterpillars yet. It also has not bloomed yet and I think that’s connected. Several of the YouTube videos that reviewed in preparation for tonight’s article mention that while the books say that the caterpillars feed on the leaves that they really go for the unopened flowers. ( For my original Pipevine Swallowtail post click here)

My first encounter with this native vine was in early Spring. Without the heart shaped leaves I mistook it for Moonseed and ignored it at first. But I did think that in a few years the spiraling pattern would leave me with an interesting walking stick. But a few weeks later the leaves began to come out and show me that I had misjudged the vine. 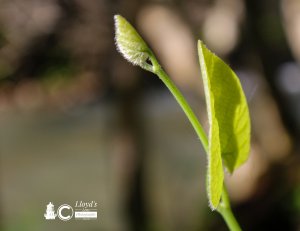 I could already tell that the leaves were not right for Moonseed.

The vine gets it’s name from the serpentine shaped flowers flowers which this particular vine has failed to produce so far. While the garden varieties often have large showy flowers the wild variety is a little more subdued. The ones that I’ve seen are small in comparison and greenish yellow. But what they all have in common is that they are a far cry from the sweet scented Rose Of Sharon in tonight’s feature image. In fact the flowers of Dutchman’s Pipe smell like rancid meat and are pollinated by flies.

Image Titled “Dutchman’s Pipe 61520”. Unfortunately the vine has not bloomed this year.

The flower if it had bloomed this year actually traps it’s pollenators and holds them prisoner until the job is done.

Even though I didn’t get to see the unique flowers of the Dutchman’s Pipe this year there’s still an excellent change to find a small clutch of red eggs underneath the leaves or to see the black and red caterpillars grazing on their host.

It should be noted that this North American native species has found it’s way down under to Australia where it’s become an invasive species that is actually killing off their native butterflies. It’s odd that in some states they almost lost a beautiful pollenator in the Pipevine Swallowtail because urban development pushed out the Pipevine while our Southern neighbors in Australia are fighting to save their native butterflies due to an over abundance of Pipevine. I typically try not to bring up the current issues that we see in the news and on social media but this the very kind of thing that the Department of Agricultural fears with mysterious seeds being sent from China. The domino effect is real and if the wrong plants are allowed to cone into an area where there’s no checks on the population it can push out the natives as well as the species that have developed to depend on them.

To book me simply reach out using the Contact Page and we’ll set a date. If you’re within a 50 mile radius of Summersville West Virginia all travel fees are waived.

I’m now using Zazzle to fulfil orders. What this means for you is a secure way to place an order, discount codes & a broader product selection! Simplymessage me on Facebookoruse the contact form on my websiteand tell me which image you want and I’ll reply with a direct link to where you can place the order.

Thank you again for your support of my page! ❤