The hickory tree behind my grandfather’s house was always one of my favorite places. The tree was always a haven for the squirrels who would scamper and play in it all year but in the Fall they really came out. My first wildlife tracking experience was observing tiny claw marks on this tree and realizing that they were made by the squirrels.

The tree produces a high volume of hickory nuts. So much so that I can remember slipping on them as a child. It was like a field of wooden ball bearings directly under the tree.

Since this is a #ForageFriday post let’s start with the food aspects. Hickory is a close relative of both pecans and black walnuts. The tree I’ve chosen as an example isn’t really one of the sweeter varieties and that’s important because they can be really astringent. If you’ve ever eaten black walnuts then you’re familiar with the odd aftertaste and hickory nuts can have that too. 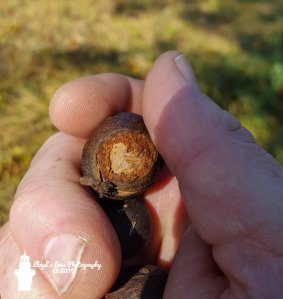 The squirrels have been cutting on the hickory nuts.

The rule of thumb is that the thicker a hickory nut’s outer shell is the sweeter the nut inside will be. There’s a few varieties of hickory nuts and some of them can be fairly bitter. We never foraged on this one because my grandfather told us this kind wasn’t really good to eat. The shell is kinda thin so we just assumed it was bitter. In my limited time I wasn’t really able to get out and find some of the sweeter ones for an example but you’d be looking for a husk that’s about 9mm thick. These would be the shagbark group. My online research suggests that the flavor of hickory nuts is improved by toasting them. Some people say that they prefer a sweet hickory to a pecan but in my opinion a pecan is hard to beat. However, pecan trees don’t really do well at this altitude and soil type.

Like the beech, hickory produces a high quality oil that’s used in cooking. Like any other food source that’s just outside of the mainstream the internet is full of articles claiming health benefits of hickory oil and some of them are probably true but I’m going to recommend that you do further research of your own.

Something that even the bitter varieties provide in spades is in providing the smokey flavor of meats like bacon. Nothing beats a well done hickory barbecue!

Any nuts that on the ground should be checked for worms.

Nuts that are on the ground should be checked for worms. Nut weevils are pretty quick to bore holes into the shell and feast on the nut.

One of the more obscure things that hickory provides is salt. It’s a bit of work but a few years ago I learned that in the early days of Appalachia salt was hard to obtain. There was few salt mines in operation and the steep mountains here meant that it was hard to get outside resources into the more isolated communities. Hickory must be able to concentrate salt because the instructions say to cop or crush the roots and boil them. The roots are strained out and the liquid is boiled down until it evaporates leaving the salt behind. Hickory salt is dark colored and is sold as a specialty product today.

The shellbark hickory has large scales of lose bark similar to the image but much more pronounced. Believe it or not shellbark hickory plays an important part in controlling mosquitoes and other insects. All trees are natural water pumps that help stabilize the water cycles and can even effect the weather as well regulate ground heat but hickory and in particular the shellbark group is the natural roost for bats. The long strips of lose bark that forms on a shellbark hickory is a natural bathouse. Local species of Little Brown Bats will even hibernate under the bark. A Little Brown Bat will eat about 1000 mosquitoes per hour over the course of it’s 40 years in the forest. We normally associate bats with caves thanks to pop culture. And they do use the caves too but when you look at the design of a bathouse it doesn’t really mimic a cave and we had the bats before there was attics and abandoned buildings to roost in. The bat house mimics lose bark. Which is a good reason to use hickory for land rehabilitation.

I have only given a brief overview to show the potential of hickory. As always my #ForageFriday posts are designed to be a conversation starter and give you a starting point for further research. And since I wasn’t really able to provide good examples of the more useful hickory nuts I’mgoing to include a link to How To Identify Hickory Nuts on Wikihow. I found the guide there to be pretty easy to follow.

Hello Friends and thank you for your support of my page. If you have enjoyed the photos or the writings please let me know by commenting and sharing my work on your social media. I also want to invite you to Follow Lloyds Lens Photography on Facebook

I’m now using Zazzle to fulfil orders. What this means for you is a secure way to place an order, discount codes & a broader product selection! Simply message me on Facebook oruse the contact form on my websiteand tell me which image you want and I’ll reply with a direct link to where you can place the order.

Thank you again for your support of my page! ❤