Disclaimer: Tonight’s wild edible plant is considered to be toxic unless prepared properly. Plants in this family contain high concentrations of calcium oxalate which is can cause sores and numbing if ingested and may even be fatal. My Forage Friday posts are only intended to be for entertainment purposes and I always recommend that you do further research before trying any wild edible plants for the first time..

The mottled light filters through the new leaves in my little forest sanctuary. I have come for another survey of what nature might surprise me with. The area is actually quite small but has really been densely populated by a wide variety of subjects to explore and photograph. This day was no exception. Standing proudly among the ferns and Trillium was Jack-In-Pulpit. Or, as it’s otherwise known “Indian Turnip”.

There is an intrinsic duality to the plant. It has two main names that It goes by. And it is considered both toxic and edible at the same time. As stated in the disclaimer the plant has a high concentration of calcium oxalate. Oddly enough, that’s the same stuff that kidney stones are made of. Not being a chemist I only have a basic understanding of the substance but I do know that the chemical has different forms and the toxicity may vary with each. So if you’re curious about the toxin I’ll need to refer you to the link in the disclaimer. And, it’s a combination of the toxin, the availability of the plant itself and the completely of the process to remove that toxicity that’s kept me from having even a nibble of it.

The process of making Jack-In-Pulpit edible isn’t as simple as leeching the tannins from acorns or cooking Poke Salad in multiple changes of water. And it only seems to be the roots that were consumed by Native Americans. The process involved slowly roasting the roots in the ground for several days and a 6 month long drying process. The results were then ground into a powder that’s rumored to taste like chocolate. But before you crawl through the forest looking for Jack, read on. The plant was also used as a contraceptive. This can only be effective if the plant has phytosterols strong enough to interfere with a woman’s endocrine system and thus prevent pregnancy or, it’s so toxic that she has a miscarriage. Either way, there’s more than a considerable amount of risk. Just because something is natural doesn’t mean it’s not dangerous. The online reference I saw said that only 2 tablespoons of the preparation would cause permanent sterility. My mind kept going back to the Wikipedia article saying that calcium oxalate may be lethal.

The hood of Jack-In-Pulpit Is called a spathe. The spathe gives Jack-In-Pulpit a look that reminds us a carnivorous pitcher plant. But Jack-In-Pulpit practices a catch and release philosophy. In the male phase the spathe will have a small slit near the bottom that allows the pollinators to escape after a good dusting of pollen. And here’s where we see that duality again. Jack-In-Pulpit is capable of going back and forth between male and female flowers. The scent of the flowers is best described as acrid. It’s pollinated by fungus gnats that are attracted by the smell of rotting meat with a hint of garlic. 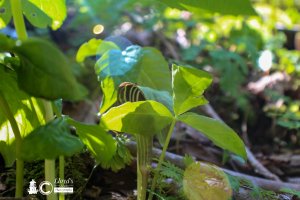 It’s at this point in the Forage Friday posts that I’ve been considering the possibility of cultivating the forage plants as ornamental plants to sell and raise cash. But Jack-In-Pulpit seems to be one of those plants that only grows well in God’s creation. If you’re talented enough and have just the right spot for them to flourish then nothing’s impossible. But Jack-In-Pulpit is said to resist cultivation and therefore will remain wild and free in my little forest sanctuary.

To book me simply reach out using the Contact Page and we’ll set a date. If you’re within a 50 mile radius of Summersville West Virginia all travel fees are waived.

Hello Friends and thank you for your support of my page. If you have enjoyed the photos or the writings please let me know by commenting and sharing my work on your social media. I also want to invite you to Follow Lloyds Lens Photography on Facebook

I’m now using Zazzle to fulfil orders. What this means for you is a secure way to place an order, discount codes & a broader product selection! Simplymessage me on Facebookoruse the contact form on my websiteand tell me which image you want and I’ll reply with a direct link to where you can place the order.

Thank you again for your support of my page!❤