The mid morning sun has driven away most of the clouds. As I walk the gravel road that leads into the forest I’m aware of almost everything that moves just inside the trees. Several squirrels and a few chipmunks scurry around looking for the first of fallen acorns. The birds flitter from branch to branch. The buzzing of insects is all around. A few leaves tumble down from the canopy. The sounds of nature fill the air. The rapids in the Gauley River below roar and the voices of the other park patrons blend into the chorus. There are five females, two males and three children all near the playground. I can’t see them. But I know that they are there. I can follow the concentration of the bird noises which grows softer where the humans are present. Deeper into the forest the chaos of the outside world fades away. I can smell the horseshoe fungus growing in a black locus tree. The smell of Wintergreen tells me a large birch tree is nearby. As I drop over the hill the forest opens up into a small clearing. A stump left behind by the park rangers is the perfect spot to enjoy the solitude. A place where the unbroken chain of thoughts and contemplation can lead me to a place where inspiration lives. And then it happens. An idea is born and it grows into a dream. And the dream was wonderful. I’ll open the little file in my memory and tuck the dream safely away for now. I began to walk back to my big blue truck occasionally peeking into the file in my memory checking on the little fledgling dream. He has to be kept safe and warm while I prepare a place for the dream live.

If your mind can conceive and your heart can believe, then your will can achieve.

Our dreams are possible only if we work to make them real.

Friends if you have enjoyed the photos or the writings please let me know by commenting and sharing my work on your social media. I would love to hear about your dreams and what you’re doing to make them real. I also want to invite you to follow Lloyds Lens Photography on Facebook.

Nobody is born being an expert. We might all have different aptitudes for various skills but it’s practice that makes perfect. Even if we achieve the skill level of “expert” that doesn’t mean that we are free from simple human error. Suddenly being faced with the undeniable truth that you’ve made a royal screwup is God’s way of keeping us humble. In other words, oopsies are the great leveling force of the universe. Remember, it was experts that built the Titanic and amateurs that built the Ark.

When I saw the collection of lost fishing tackle snagged in the overhead power lines my first thought was that someone’s kids had been on their first fishing trip. This inspired the meme below. 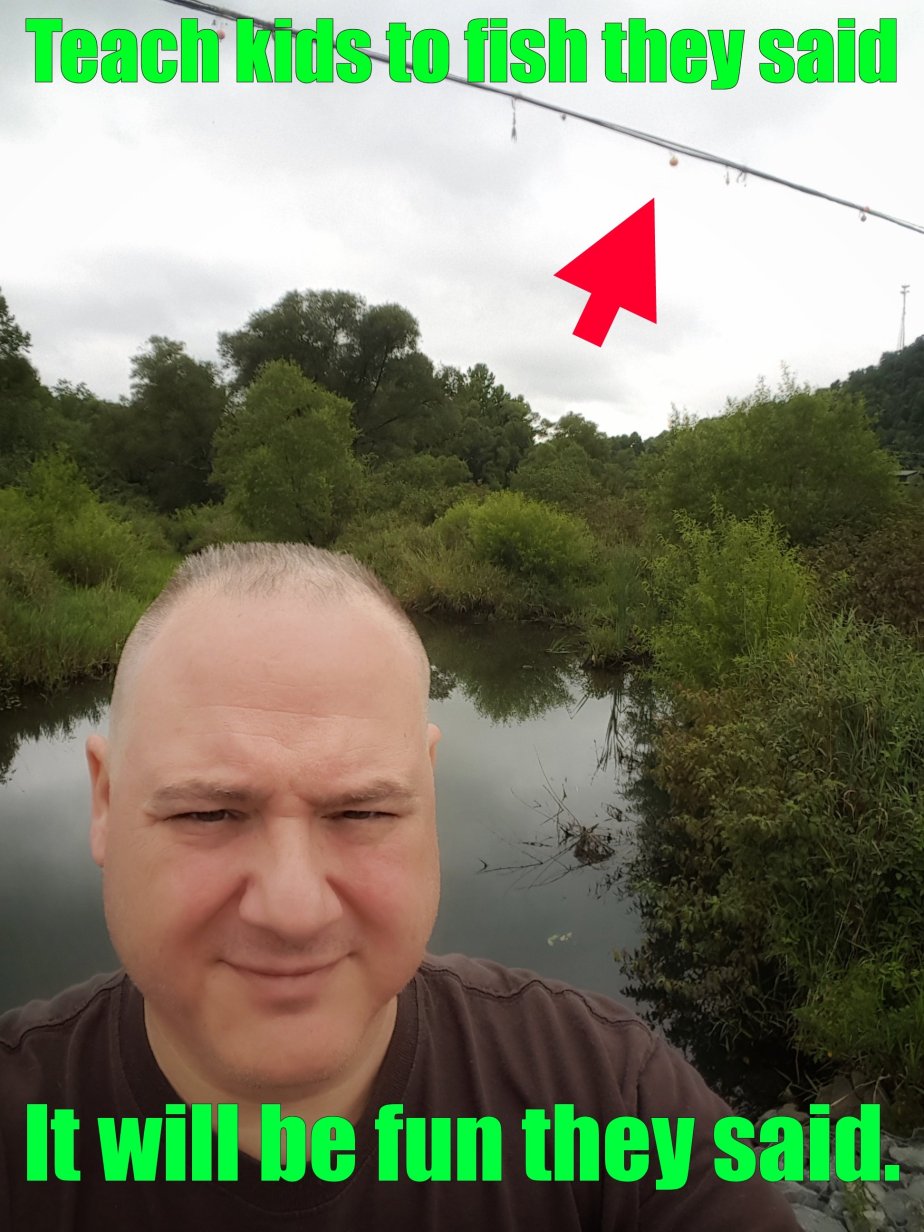 But after some thought I began to consider the phenomenon of “muscle memory”. If you are trained to cast a line with a high arc you might not think to adjust your cast while standing under the power lines. Your reflexes would kick in and your body would react out of pure instinct. You would do the right thing but at the wrong time. This kind of mistake happens to all of us and it happens more often than we care to admit. It also happens during the thought process and when reacting to something that someone else has said or done. I think that’s why it’s important to be quick to forgive. Jesus said to let he who is without sin cast the first stone. While there’s different interpretations of what was being implied in this statement I believe that at least in part Jesus was pointing out that errors in actions often include errors in judgment and nobody is immune from this. The experts in the law were reacting out of reflex without examining the circumstances. It’s the same kind of mistake we all make every day.

Friends gather on the banks of the beautiful Kanawha River at Glen Ferris West Virginia. They’ve come to enjoy the warm sun and the cool waters. Playfully they leap into the air for the occasional game of tag and to float on the warm air as it rises and carries them to the tops of the trees. Their lives are completely devoid of aggression and malcontent. They soar on the slightest breeze because they have no burdens to hold them down.

It shouldn’t be a surprise that good will leads to a happier place in life. It is a promise made to us by God. We all have good days and bad days. There’s days when I can get triggered by the slightest little thing and before I can stop myself I’ve said or done something that I regret for weeks. And, you know what? It takes twice as much expression of good will to free me from that regret. I might feel like I was winning a debate or putting someone else in their place but the truth is that those actions become a burden almost immediately. So, if you want to know the real secret of joy and freedom it’s benevolence.

One of the things that I love most about my home in the mountains is all the little churches. The steeples just seem to pop up above the canopy like friendly wave of hello. I remember as a kid that one of the most important jobs in the congregation was to be responsible for ringing the bell. The call to worship had to be given at about an hour or so prior to the start of service and then again when it was time to get started. On a good day we could hear the bell ring from miles away. Soon there was a parade of cars moving on the one lane road. You had to there early so you could get a good seat and a place to park. The funny thing is that everyone occupied the same seat and parking spot every Sunday. And, if one of the kids sat in a different place an adult would quickly remind them of the unwritten rules about where to sit. “Hey, that’s where so-and-so sits.” We would have to move around until we finally wound up in the same spot we sat in last week. At the end of service was another unwritten ritual. The shaking of hands. In a small country church the Right Hand Of Fellowship is a common practice. But young boys are mischievous by nature and quick to adapt a custom to their own uses. As soon as the service closed there was a race to the door where The Right Hand Of Fellowship was changed into the Running Of The Gauntlet. The boys would line the exit and extend their shaking hand to anyone trying to leave. The adults would then be obliged to accept the handshakes before they could exit thus creating a bottleneck at the door. I think that final joke was on us boys because we grew up to be the adults caught in the bottleneck later in life. I have to smile and and get warm fuzzies every time I see the steeples poking up from the trees. It always brings back childhood memories of the little churches and the extended family who attended them.

It’s in those moments of peaceful contemplation that you really get to know the voices the speak to your spirit. We all have theses inner voices that speak to us throughout the day. The voice that tells you that you have chores to do, the voice that talks you out of doing those chores. There’s a voice of confidence. ( Be careful about this one because he can get you into trouble. ) There’s the voice of doubt. ( Also not to be fully trusted. )

I suppose that if we were to take inventory of all these inner voices that the list could be quite long. But the one I want to focus on is the quiet one. The voice doesn’t speak often. He patiently waits for an opportunity to make his point. The quiet one doesn’t compete with the other voices. He doesn’t have to. He doesn’t argue or complain. The quiet one is logical and honest without being judgemental. The quiet one is the voice of Truth. He’s that Still, Small Voice. He is the voice of God. One of my atheist friends once expressed concern ( while smirking) about people who think God speaks to them. My only answer there is that God speaks to everyone, it’s just that not everyone listens. As I said, He doesn’t compete with the other voices. He simply waits to be heard. This why in a lot of my writings I like to focus on the opportunity to sit in quiet and peaceful places. It’s why I strive to push back the world with its ads and loud voices that attempt to dominate your every thought. Because when that Voice Of Truth speaks I don’t want to miss out on what was said. His words are life that added to my day.