Gently gliding on the warm breeze she sails through my field of vision and softly lights on the sweet clover. She is something special. Her distinct stripes and long “tail” identify her as the Zebra Swallowtail butterfly. While she feeds on the nectar of flowers her young feed exclusively on the pawpaw tree. Once a favored fruit in the Appalachian Mountains the pawpaw (AKA pond Apple or custard apple ) is almost found only in the wild. Because the fruit has almost no shelf life commercial growers found no use for it. As a result it was not cultivated and is not nearly as abundant as it was even just fifty years ago. Because the the tree is so important to the butterfly their numbers have also declined. But on the old homesteads found on edge of civilization the pawpaw still grows and even thrives in a few places and so does the Zebra Swallowtail butterfly. If you see one during the breeding season then you can be sure that a pawpaw patch is nearby. If you’re an adventurous connoisseur of natural foods or vantage crops then it’s worth trying to find the pawpaw in season and give it a try.

Hello Friends and thank you for your support of my page! If you have enjoyed the photos or the writings please let me know by commenting and sharing my work on your social media. I also want to invite you to Follow Lloyds Lens Photography on Facebook.

I just wanted give you a quick update on my quest for the eagles of the Kanawha River. This image was taken a couple of weeks ago near the Glen Ferris Inn in West Virginia. The bird was spotted over Kanawha Falls. I was out with my camera on the way home from my day job. I decided that I had time for a few quick shots of falls and kayaks when flash of white caught my attention. The largest lens I had with me was my Panasonic Lumix DMC-FZ30. Knowing that the local eagles are dark in color and only the head is white I was fairly certain that it wasn’t an eagle but this was still a big bird and it was moving fast. Fighting to keep my hands from trembling with excitement I engaged the burst mode. This bird is really fast! I kinda felt like an old west gun fighter as I tried desperately to keep him in frame and in focus. (This is not a time for manual mode) The whole encounter was only about 30 seconds as this bird’s aerobatic maneuvers kept me shifting focus out of pure reflex! First he skimmed the water towards the falls only pulling up at the last second. I lost sight of him as he banked in front of the trees and disappeared behind the inn. I started to scan the falls with my camera hoping that he would come back for a second run over the falls. That didn’t happen. Instead he pops up from behind the inn directly overhead of me. I raised my camera one more time bending over backwards and trying to focus. I almost fell over backwards. I spun around while zooming in and out and praying for that little beep from the camera body to let me know that I have a lock on the focus. Finally I get the beep and green square in the viewfinder just as the raptor performs a figure 8 maneuver that would leave any jet fighter in pieces on the ground. As the bird dives and skims parallel to the falls this time I managed to get one usable image. This was an osprey! Only about half the size of the eagle but still a very special bird. I now have a second goal to catch a high quality image the osprey.

On a side note, the existence of bald eagle has been challenged. As proof that both birds are in fact inhabiting the area I’m sharing this photo of a juvenile bald eagle. The image is too grainy to sell as art but it’s the best I could get without a longer lens. It’s only a matter of time before I can either stalk in close enough for a clear image or afford an equipment upgrade. Both eagle and the osprey were taken with the same camera. 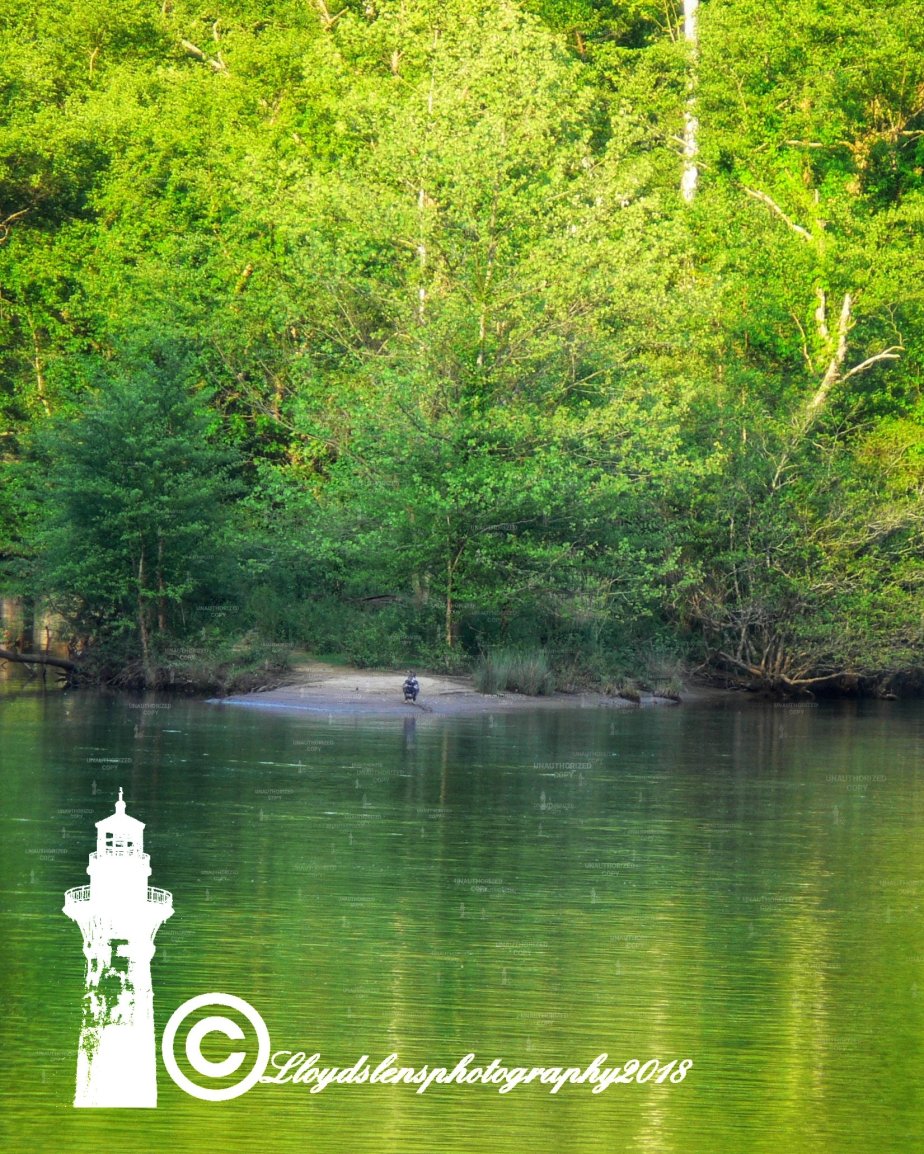 Something stalks the neighborhood in my mountains. Slowly and silently it creeps along the banks of the rivers and streams. It sharp eyes detect the slightest movement just below the water’s surface. It strikes like lightning and it’s prey has little chance of escaping the razor sharp beak.

The Great Blue Herons are one of my favorite birds. I have never seen a native species that reminded me more of a dinosaur. The one pictured here was close to three feet tall. The long serpentine neck, wide wingspan and habit of trailing it’s lags as it flies really makes one think that they’ve crossed into the distant past. This one also seems to have a sense of humor. It likes to lurk around just below the bridges in my neighborhood and spring up out of creek when you least expect it. If I didn’t know better I’d swear it laughs as it flies away. I haven’t been able to spot the nest yet but I do occasionally hear it’s grunting calls coming from the thick bush. They’re truly one of the more amazing sights in my wild wonderful West Virginia and hope you get to see one if you’re ever traveling close to the water. And, if you happen to hear a snicker it’s probably the one that likes to startle me.

Tonight’s image is the water wheel of the Glade Creek Grist Mill at Babcock State Park. I took the picture several years ago when I was interested in creating a micro-hydro power plant for my home. My plan was to study pictures of water wheels and eventually make something that I could use to run the lights during an outage. While the plans for an energy independent home never manifested I learned a lot about the difference between working with God’s creation and working against it. Providence is always there waiting for us but we have to recognize it and figure out how to take advantage of it. For a wheel like the one here there has to be enough water above the wheel to move the heavy stones that grind the grains into flour. This means that the mill has to be in just the right spot and the water has to be channeled. Debris has to be filtered out to avoid damage to the wheel. The spot has to be on a stable foundation. And that’s just the beginning. Sometimes when we’re praying and searching for God to fill a need in our lives we expect Him to drop the answers in our lap fully assembled and all tied up with a pretty bow. That can happen but more often than not God provides the components and we have to recognize them and then make use of them. The water, the stones, the trees that became the wood and even the physics that govern the use were all in existence long before the mill was created to fill the needs and feed the people. When we are praying for God to make a way it’s likely that He’s already made a provision if we can just figure out how to put it together.

I love big old ancient trees. The older the better. In ancient times, big old trees were thought to be magical entities that stood between heaven and earth. They guarded the secrets of the universe. Trees also represent a shelter for weary travelers. The give us food and medicine. I believe that the tree in the feature image is a Red Elm tree. Also known as the Slippery Elm, the inner bark yields a mucilaginous substance that is used to treat respiratory ailments. The tea made from the inner bark has a sweet spicy flavor that’s pleasant enough to enjoy just for relaxing. Don’t drink too much because it’s also a laxative.

I’m really surprised that this one is still around. Sadly, the Elm population was nearly destroyed by Dutch Elm Disease. In the spring the government hangs purple boxes in the trees that attracts the beetles responsible for the spread of fungus. The beetle traps seem to be working well so hopefully we’ll have these awesome trees around for generations of travelers to shelter under or collect medicine from.